A scoreless first quarter quickly turned into an offensive explosion in the second quarter. Two Hendricks rushing TDs by Cal Adams gave the Hawks a 14-0 lead which was followed up by a North Forsyth touchdown late in the second quarter making it 14-6 at the half. Out of halftime a 70 yard kick return by Miles Hasty put the Hawks in scoring position for another rushing touchdown. The Hawks would add two more scores in the game from Keagan Krog and Reese Coursey giving the Hawks their first victory of the season, a 34-6 win over the Wildcats. 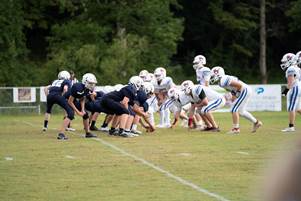